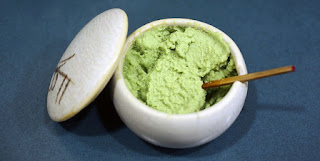 At the restaurant, the client was looking through the menu, and feeling peckish, he asked whether there was some bread, since he saw what appeared to be some “delicious” looking “jam” at the side of the table. I looked at my friend, the restaurant owner, he looked at me, we shrugged and my friend said to me: “Bread? Japanese cuisine where got bread wan?” I told my friend: “Aiyah! Just look for some and give it to him lah”, not knowing initially why on earth he would want some bread for starters, especially in a Japanese restaurant.

The client took the bread, and to our horror, he used a spoon, rubbed some green “jam” onto the bread, and before we could stop him or warn him, he stuffed the bread into his mouth faster than a speeding bullet. Seconds later, a popular song from the Platters, began to unfold in front of us, as smoke got into his eyes 👀 ears 👂 and mouth 👄 and copious amounts of cooling liquid was consumed by the client, in an attempt to extinguish the “flames” 🔥.

Needless to say, not much could be done on that day, as the client needed to excuse himself and rush back to his hotel room to recuperate. Fortunately for us, he was quite a good sport, since he had mistakenly assumed that the green "jam" was harmless and could be relished with delight, only to discover the excruciating truth otherwise. My colleagues and I managed to secure a good contract with the client, and he became known as "wasabi king", having done where few have dared to venture.

Tom Yum on a Train Anniewan (Anyone)?

Many moons ago, my classmates and I took a train from KL to Bangkok for our retreat. When the train reached Padang Besar, which is the border of Peninsular Malaysia and Thailand, the engine and buffet coach were exchanged with their Thai counterpart.

After entering Thailand, my classmates and I decided to go look see (colloquial term for "have a look at") the buffet coach. There, we saw a couple from Suriname 🇸🇷 (a country at the north of South America) looking through the menu. The couple wanted to order tom yum and said to the waiter that they wanted to try tom yum, since the dish seemed foreign to them and they perhaps felt a little adventurous.

The waiter, a Thai, was not so good with English, and asked the couple: “You want tom yum 1... 2... 3... 4... or 5?” The couple thought 1 means lousy and 5 means very good, so they said 5, since they thought they would be getting the best and finest quality. When the tom yum arrived, it was super red, boiling and bubbling red in the pot, and there appeared to be volcanic eruptions. The tom yum seemed to have been transformed into a fiery angry dragon, full of brimstone and other nasty flame-like qualities ready to barbecue the taste-buds of anyone foolhardy enough to attempt a taste.

The couple offered my classmates the tom yum, seeing how scarily potent and vile it looked 👀. Naturally, my classmates politely said no and ordered their own meals instead. Otherwise, if they had attempted to savour such a dish, they would for sure "lau sai" ("keberakan yang tak terhingga", or "cirit birit", or a massive case of defecation in mass quantities, or acute diarrhoea) all the way to Bangkok. 🤔🤭😬 Having to run to the toilet to empty one's bowels every now on then, especially on a bumpy and moving train, would certainly be quite a preventable miserable experience.
at September 06, 2020 No comments:

我想教友们对傅油圣事应该有正确的观点和态度。假如病人已经领了傅油圣事，那么应该感恩，不要执意要本堂神父或是会讲某种语言者！你们难道认为本堂神父或是会讲某种特定语言的才是有效或合法的办傅油圣事吗？希望教友懂得分别两者之间---傅油圣事和特定神父，孰轻孰重？
at May 08, 2020 No comments:

Observations Concerning Anointing of the Sick

It is a perpetual issue, where some inform the priests of the parish only at the very last minute for anointing of the sick, instead of informing earlier, if possible prior to the person being hospitalised, or as soon as the person is hospitalised. Perhaps some think that anointing of the sick means the person anointed would quite likely 'balik kampung' (pass away) shortly after anointing; "extreme unction" as what it was once called. But this is no longer the case, as anointing can be given earlier, asking God to care for the person and heal him or her. I can understand if it is an emergency and the priest is informed at such short notice, but I refer to those who know jolly well that their loved one is hospitalised or about to be hospitalised, and they take their own sweet time to inform a priest, or only inform when the loved one is almost about to 'balik kampung.'

When the priest is unable to make it in time, and the person 'balik kampung' (passes away), then some begin to blame the priest for not being there to give the anointing, and the priest is "whacked" or verbally abused, and in some situations, even to the extent of being physically threatened. Hello! Last minute inform, you think the priest can fly? Be realistic and reasonable... inform early instead of informing at your convenience.

Also, some expect a priest of a certain language group to come give anointing, even though the priest is not available at that time, and other priests who may not be able to speak that particular language, could still give the anointing. This has led to anger and ill feelings among some, but what they should realise is that anointing is anointing, regardless of which priest administers it. Instead of stubbornly and vehemently demanding that a priest of a particular language group come, they should be glad and thankful that at least there is a priest to come give the anointing.

Perhaps some of us need to look at ourselves and our attitudes towards anointing of the sick. If your loved one has received anointing of the sick from a priest, then you should be thankful and grateful to God. Why become so petty or have a sense of entitlement that a priest of a certain language group must come, or even more baffling, only the priests of the parish must come? Does it mean that only the priests of the parish is halal (permissible or lawful), and other priests are haram (forbidden, illegal or unlawful)? Shouldn't we learn to appreciate that at least a priest has come to anoint your loved one? Which is more important... the anointing received by a priest, or fulfilling one's demands and expectations of having a particular priest come to give the anointing?
at May 07, 2020 No comments:

Among the many challenges a padre has to put up with when it comes to confession, one which is just as potent and potentially pengsan-able (slang in Malay for likely a cause for one to faint) is the whole matter of BO and MO. In case you do not know what those acronyms are, BO is body odour, and MO is mouth odour. At times, the BO and/or the MO could be quite overwhelming, and some of us may need to look away, not because we do not like the penitent, but because direct inhalement of such "perfume" could result in temporary lost of attention and temporary deprivation of senses.

Sometimes, the cocktail of chemicals emanating from the BO and MO is excruciating, almost similar to traces of malathion, or even similar to the stuff used to fog away mosquitoes, and such "fragrance" could remain in the near-surrounding atmosphere for quite a while, necessitating in temporary interruption of operations, before the next penitent could be beckoned.

Seeing how such interruptions could lead to further delays in attending to many other souls looking to "cuci kolam" ("clean the pool," as what a certain "mother superior" likes to say, referring to confession), I implore such persons affected to have a heart and do something to make such scents a little less obvious. A "scent"-free environment would really help enable the process of reconciliation to be carried out smoothly, for the good of all.
at December 25, 2019 No comments: 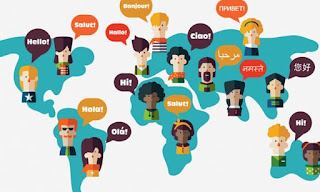 "What's your mother tongue?" I sometimes get this question from friends and others, who are curious as to why I was previously not able to speak Mandarin, and am unable to speak in other Chinese dialects (unless, of course, one wishes to include "flowery language" in Hokkien or Hakka, which I happen to know some - censored, cannot say here wan). Some folks even classified me as OCBC or banana... in case you are wondering what those words mean, OCBC is not the bank, but "Orang Cina Bukan Cina", a not so pleasant way of saying: "a Chinese who cannot speak "Chinese"." Banana means, yellow at the outside, and white in the inside, implying a Chinese who has become westernised and cannot speak Chinese.

Actually, if you look at the word "mother tongue", I believe a better way of looking at the term would be: the language that your mother taught you from the time you were an infant. In that aspect, I would unequivocally and categorically deduce that, given the circumstances, my mother tongue would certainly and definitely be "English" and not just any "English" but "British English."

In case you haven't got the faintest idea what I just wrote, let's put it in Malaysian English: "So aaa... my mother tongue is English yaa... ok? understand? Good... Dei... let's go tapau some nasi lemak and chee cheong fun. Or you prefer to eat in? Either way boleh."

So as you can see, I was previously not able to speak Chinese dialects, including Mandarin, as I had little exposure, coming from a family which speaks English at home. It was only when I went off to Taiwan that I picked up, with some success, Mandarin, not just any Mandarin, but Taiwanese Mandarin (chei wah... action wan ah). Then back here in Malaysia, I came to realise that Taiwanese Mandarin does not jive so well with some of our local folks here, since some words are different in pronunciation. After some challenging adjustments, I learnt to convert, with some mixed success, to Malaysian Mandarin. Of course, there are some side effects to such conversion. My friends in Taiwan tell me that my Mandarin has deteriorated from their level, but at the very least, folks here have some idea what I am saying, if you know what I am saying

So there you have it! My mother tongue has always been English. I learnt Mandarin in Taiwan, and Bahasa Malaysia in school, so be kind ya, if I end up going back to English. Hard disk cannot process and translate to other language so quickly (unless, of course, if I translate to BM, which I am quite ok with). Sekian, harap dimaklumkan (That's all folks!)
at May 13, 2019 No comments: