Decorum and Civilised Attitude and Behaviour: Gone with the Wind? 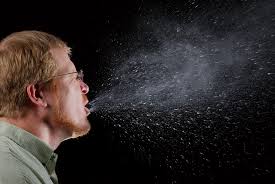 Lately, I have noticed how some people behave at or near coffee shops. The coffee shop is quite full at the time of the day, and I see people hovering near other patrons, waiting for the opportunity to pounce on a table, and then suddenly, someone sneezes without bothering to cover the mouth. Also, some patrons get up and just walk away without pushing the chair or stool back towards the table. Near the coffee shop, someone spits on the ground with a loud and disgusting "haak kaaahpuui!" On the ground near the coffee shop, there are food containers with leftovers strewn all over the ground, as if someone did not have the time or decency to throw it properly into a rubbish bin.


Sometimes, we even see such behaviour too in church. People let their children eat in church and sometimes even adults too grab a bite, sometimes even while Mass is on, and sometimes even food is spilled on the pews; some even throw used tissue paper on the floor; some put on extremely strong perfume, causing others to suffocate or even sneeze, and once again without covering their mouth; I have even seen certain folks digging their noses for gold or do some other disgusting stuff. At the car park, some are so inconsiderate in the way they park their cars, causing congestion, anger and sometimes even shouting matches; and at times, even park right in front of the priest car, and when the priest asks the person to move his or her car so that the priest could drive out, the person gives the priest a dirty look or shows monkey face or a sour face. Even at catechism classes, we sometimes come across certain impatient parents who want their children taken out earlier so that the family could go somewhere else, possibly for a trip or shopping, or even for tuition class or some other extracurricular activities.

This makes me wonder: have some become so uncivilised or so uncouth that one can litter, spit, sneeze or do other disgusting stuff, without the least bit bothered about cleanliness and decorum? Have some begun to treat church as merely an obligation, and have become indifferent or insensitive towards decorum and decency? Has faith become so inconvenient for some, so much so that catechism becomes a chore or a hassle?

At the end of the day, such lacklustre and recalcitrant attitude, behaviour and conduct may lead only to selfishness, indifference or even lost of faith. Our attitude and behaviour are being observed especially by the younger generation, and also by others exploring the faith, and I wonder whether some of us are aware or even bothered about the kind of "witnessing" we are doing. Perhaps we need to take initiative and remind ourselves of who we are and how we should conduct ourselves, if we call ourselves brothers and sisters in Christ, sons and daughters of God. Let us make every effort to ensure our church remains a house of prayer, not a den of thieves, and bear proper witness for His greater glory.
at August 24, 2018 No comments:

Ramblings of a Parish Padre - Responsibility and Accountability

Seriously speaking, I do not wish to micro manage or keep on telling people what to do, but there are times where the persons affected or involved are unable to comprehend what they are supposed to do, or they seem to take quite some time to grasp their duties and responsibilities, and despite several attempts and reminders, mistakes are repeatedly made, incurring the wrath of affected parties; or some seem to think that the church should be lenient or some believe that compassion should be practised without compromise, come what may.

Also, finding persons willing and able to get the task done effectively and efficiently is not easy, especially when it comes to remuneration, where commercial rates are asked, though the church collection does not make such commercial rates viable. Besides, certain benefits that are to be expected in commercial circles, may not be entirely possible when it comes to a church setting. For example, how does the church deal with perks and bonuses demanded by certain folks, where such perks and bonuses are possible in the commercial world,

Moreover, I sometimes end up having to tell folks that a tree has grown too tall and should be trimmed, so that it does not cause damage to the awning above, as if no one else seems to be able to notice the offending tree involved; or certain facilities are damaged or need to be replaced, but folks are not being proactive or taking initiative or responsibility and informing the parish office; or even the door of the restroom is damaged, and somehow I end up being the one noticing it; or certain procedures are not being followed, and I end up having to do damage control or calm things down, and suggest solutions and viable alternatives.

So, how does one let others do their thing or maintain the status quo, when things are not being done properly in the first place? Do we just let folks do what they can, and let things be, even if it may cause neglect or serious problems at a later time? How do we ensure that roles and responsibilities are observed well, when certain parties are not "up to mark" so to speak, and finding "up to mark" folks is certainly no easy task? It seems easier to adopt a laissez-faire approach, but would that be a right or just thing to do?

Then when abuses, misconduct or malpractices occur; or when situations get out of control due to too much leeway or lack of accountability; who ends up taking the rap? Will the bishop go after the other parties affected; or would certain parties be willing to take responsibility and own up for what has come to pass? Of course not! You and I know whose head ends up on the "chopping block,"

The parish priest is the administrator and spiritual leader of a parish. Both areas need to be handled, and one cannot just focus on one, to the detriment of the other. If certain folks are consistently and faithfully doing their part, and doing it well, then certainly that would be a great help. But the reality is, not many of us are blessed to have such great help. So, though I may sound like a broken record or appear to be the "bad guy," it is not because I relish doing so. In a perfect world, everyone should be responsible, effective, efficient and dedicated, or as previously mentioned, "up to mark," but do we live in such a utopia?
at August 22, 2018 No comments: