Planning to Get Married? Sure or Not?

When a couple comes to see a priest when they are planning to get married, there are several questions which may normally be asked. Among the many questions asked, some are quite important or crucial, since such questions would help determine whether the couple is really ready for marriage. In other words, whether the couple is approaching their graduation to earn a degree in "paktorlogy" or not ("paktorlogy" is a Chinese-like word roughly translated as dating with intention and hope of eventually tying the knot). Since some questions may be confidential or sensitive in nature, I will mention only some which should be thought about before the couple goes to see the priest. Other questions may be asked, and some questions would require a response without any prior preparation (so as to ensure that the couple answers genuinely and truthfully, without any coercion or 'kacauing' (interference or disturbing) from other parties who may be trying to ensure the marriage takes place, come what may):

2. Why do you want to get married?
Another strange question, but surprisingly, some couples have not even thought about such a question carefully. Don't rush into marriage unless you have seriously and honestly thought about this question. One common answer given is "because I love him or I love her." But why do you love him or her? In some situations, the couple is being coerced into marriage due to some family reason (including the possibility of "shotgun" - not "senapang" but a different meaning, some of you may understand ;)  - a hint... something to do with "a bun in the oven" or "roti dalam ketuhar")

3. Have the couple made preparations spiritually?
Some couples are so "kan cheong (緊張)," or nervous, or worried, or concerned, or kiasu about making sure they get:
a. The nicest 4 or 5 star hotel
b. The nicest wedding photos
c. The nicest wedding lunch and/or dinner
d, The nicest wedding apparel (some brides especially want to wear stylo-milo or shockalingam wedding dress, without considering the suitability of such clothing especially in church; or whether the dress is suitable for the climate, without undesirable consequences; or whether the dress or "baju" can fit properly or not, without disastrous consequences).
e. The nicest honey-moon location
f. The nicest whatever.
But how many couples have actually taken the trouble or effort to prepare for their wedding spiritually. Have they been regular in their confessions, participating at Mass, spending time in prayer, some form of spiritual direction with a priest or religious sister (if the girl feels more comfortable talking to another "girl")? How many couples have taken the trouble to prepare for a proper church wedding, including the date, time, readings, hymns, etc? How many couples are seriously putting God as the center of their lives?

4. Are the couple prepared for married life, both physically and financially?
Sounds strange, but some couples may be getting into marriage without realising potential health issues (some of which may emerge or appear a little too late, after the wedding), or that they do not have sufficient funds to support each other and the children that they may have. Many marriages have ended in the rocks because of insufficient preparation for these. Health related matters could be discovered by going for a thorough medical examination, and one should consider the cost of the wedding, as well as the cost of supporting a family. While some couples may want to have a grand wedding with all the bells and whistles, it does not seem wise to start a marriage in serious debt, or with serious shocking health issues which one may not have taken into consideration, right?

5. Are the couple communicating well?
I have seen some couples spending a lot of time using their hand-phones, android tablet, iPad or some other fancy gadget to communicate with each other (through sms, whatsapp, Facebook, Viber or some other messaging app), but are they making much effort to communicate with each other face to face? All these gadgets and gizmos are fine, but face-to-face communication is necessary, as one could pick up body language, visual, voice and other cues better. Also, are the couple making effort to resolve issues together, prior to getting into marriage? If the couple is not able to see eye to eye on small issues, just imagine what would happen when a bigger or serious issue arises? Would the marriage survive? Would the couple remain faithful and committed to each other? Communication is very important, since the couple would need to deal with many matters together. It is no longer a "sdn. bhd." or "personal" thing. It is a "together" thing. And this together thing is for life.

6. Interference from In-laws and Out-laws
Are the parents being, well, too "parently" or too involved with the couple's life (in other words, are the in-laws and/or out-laws being too interfering with the the couple's matters)? If every single matter the couple has to turn to daddy or mummy for approval or consultation, how to survive as a couple laa. Are you getting married to the man or the woman, or are you getting "married" to the whole extended household? I remember one incident where the couple came to see me in my office for initial marriage preparation, accompanied by their "kaum kerabat" or entourage of father, mother, sister, brother, grandfather, grandmother, uncle, auntie, and God knows who else. I immediately inquired: "Wah! So many people want to get married aah?" Immediately, the whole jingbang of in-laws and out-laws left, so that I could speak to the couple without interference or interruption. A word of advice... your son or daughter is already old enough to make his or her own decisions... he or she is already a "big buffalo" laa... Let him or her do what he or she needs to do laa ;) :p :D

7. Spouse of Different Faith
If your spouse is of a different faith, are you prepared to live with him or her, while ensuring that you do not abandon the Catholic faith? There are other implications on this, which the priest will advise the couple, so one needs to consider the challenges of living with another not of the same faith. It can be done, and it has worked out for many. Just need to be well informed and prepared, with the help of the parish priest and Catholic community.

So, as you can see, planning to get married is not a walk in the park. It requires one to make proper and thorough preparations, so that one could stay married for life. My professor in the seminary used to tell us: "A marriage is: one and two, super glue." Once, you are stuck, you remain stuck to each other for life. Don't get married unless you know what you are getting yourself into. Some folks have told me that sometimes, a marriage may involve 4 rings: engagement ring, wedding ring, suffering and enduring. It does not necessary have to be like that, and it does not have to be always that way, if one does the necessary preparations, with God's help. 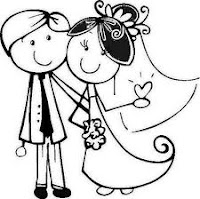 Of course, this list is not exhaustive, since there are many other matters and elements to consider. But these are perhaps some of the more important matters to consider. That is why couples are seriously encouraged and expected to see the parish priest at least 6 months prior to the wedding. Don't go and prepare everything else then only see the parish priest. See the parish priest first. Once the initial preparations, interviews and guidance have been made, then only go to town with the other stuff. The parish priest is not interested in making your life difficult. He is only trying to help you be prepared for marriage in every way possible. Remember, a wedding is only a moment in time, a marriage is for a life time. Don't play play with getting married, but be good and be ready for the ride of a lifetime.
at December 27, 2015