I have observed, from time to time, people coming to me and asking whether their elderly and seriously ill dad or mum could be baptised. While it is true that "Every person not yet baptized and only such a person is capable of baptism," there is also such a thing as "intention to receive baptism." This means that the person himself or herself must have voiced his or her intention to be baptised, and that the person has received some instruction about the Catholic faith. 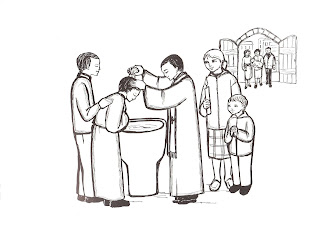 Canon Law, which is Catholic church law, puts it clearly:

Can. 865 §1. For an adult to be baptized, the person must have manifested the intention to receive baptism, have been instructed sufficiently about the truths of the faith and Christian obligations, and have been tested in the Christian life through the catechumenate. The adult is also to be urged to have sorrow for personal sins.
§2. An adult in danger of death can be baptized if, having some knowledge of the principal truths of the faith, the person has manifested in any way at all the intention to receive baptism and promises to observe the commandments of the Christian religion.

So why I am bringing up this matter? It is because of two situations which have crop up which people should understand. What matter am I talking about? In a nutshell, it concerns a keyword: convenience.
But these reasons or excuses are not sufficient grounds for a person to be baptised. The person himself or herself must freely, genuinely and joyfully be willing to receive baptism. Even when the person is seriously ill and in danger of death, the person should not and cannot be forced to be baptised, just to make some family members happy. Convenience is not a reason for a baptism to take place. After all, are we being fair to the person, who has had no intention or desire to be baptised, but because of interference or threats from certain family members, agree (possibly grudgingly) to go ahead with the baptism?

Therefore, we should be vigilant when it comes to matters like this. May those who are to be baptised do so with full intention, full desire, happily, willingly and joyfully, not to please certain family members or for the convenience of such family members.
at May 28, 2016