Will the Real Prodigal Son Please Stand Up?

Many of us are familiar with the parable of the Prodigal Son. We may have read it so many times, taking comfort from the reassuring words and gestures of the father towards the younger son in the parable. But if you look and read closely the parable and read between the lines, you could actually discover a great recipe for the next "drama minggu ini" (this week's drama) blockbuster. Why so? Because, from the text, we could begin to wonder who is actually the real prodigal son, and who in the end really needs help. Before we go further, let us look at the text:

25 'Now the elder son was out in the fields, and on his way back, as he drew near the house, he could hear music and dancing. 26 Calling one of the servants he asked what it was all about. 27 The servant told him, "Your brother has come, and your father has killed the calf we had been fattening because he has got him back safe and sound." 28 He was angry then and refused to go in, and his father came out and began to urge him to come in; 29 but he retorted to his father, "All these years I have slaved for you and never once disobeyed any orders of yours, yet you never offered me so much as a kid for me to celebrate with my friends. 30 But, for this son of yours, when he comes back after swallowing up your property -- he and his loose women -- you kill the calf we had been fattening." 31 'The father said, "My son, you are with me always and all I have is yours.32 But it was only right we should celebrate and rejoice, because your brother here was dead and has come to life; he was lost and is found."' (Luke 15:11-32) 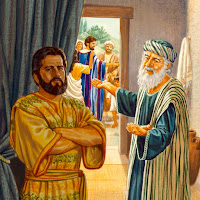 Notice that the elder son would have known that the day of the younger son's return was the greatest day in his father’s life. Also, the father has “killed the fattened calf”, an extravagance in a culture where having meat at meals was considered a delicacy. The elder son was fully aware that his father was ecstatic with joy. Yet he refused to go into the biggest feast his father has ever put on. This was a remarkable, deliberate act of disrespect. The father had to “go out” to plead with him. Just as he went out to bring his alienated younger son into the family, now he had to do the same for the elder son. What does this mean to us? Basically, it means that the elder son is lost.

The elder son is not lost in spite of his good behaviour, but because of his good behaviour. To him, such good behaviour meant his father owed him or was indebted to him. This led to the elder son becoming self-righteous, and this is what is keeping him out. Observe what he said: "but he retorted to his father, "All these years I have slaved for you and never once disobeyed any orders of yours, yet you never offered me so much as a kid for me to celebrate with my friends. But, for this son of yours, when he comes back after swallowing up your property -- he and his loose women -- you kill the calf we had been fattening. (v. 29-30)" See the kind of language the elder son used in front of his father, and the kind of attitude he had? Not only that, the elder son was also:
At the end of the parable, Jesus is warning us of a dangerous condition. The younger son knew he had gone astray and came back. But the older son had been blinded by his self-righteousness, his anger, his unforgiving spirit and many more, that he was not aware or he simply refused to admit that he too had gone astray.

If we look at our lives, have we become more like the elder son? Have we begun to think that we are ok, or only our needs and wants matter, or that we must be rewarded for all we do, or we have adopted a "holier than thou" attitude? Sometimes in life, we may have been just like that elder son in one way or another. If we are aware of this, have we made effort to repent and change our ways? Or are we still stubbornly sticking to our ways and preferring to remain lost?
at February 26, 2015