Oops! A Boo Boo in What Was Said 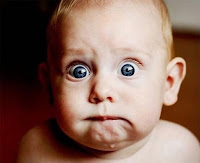 One day after celebrating the morning Mass, a couple approached me and asked me to pray over them because it was their wedding anniversary. The wife requested me to pray especially for her because they were already married for 5 years, and despite many attempts, they had not been able to conceive. I prayed over them as requested, and wished them all the best.

Then one day, after about five months, I was invited to a party. I was having a chat with some people, when a woman approached me, with a noticeable bump in the "oven". The woman was the one I had prayed over, and she excitedly said to me: “Father, thank you so much. You know, because of you I am pregnant already!” Straight away, the people near me were shocked, some of their jaws even dropped, some with eyes bulging, there were even some gasps audible, when they heard such startling news. I looked at the woman in disbelief and bewilderment, and fortunately for me, the woman, horrified upon realising her carelessness in what she had just said, promptly and quickly explained to them that she and her husband had asked me to pray for them to have a child, and that they had successfully conceived. Upon hearing the woman's explanation, the people around laughed, some sighed in relief, and we continued enjoying the party and each others' company.


When you come to think about it. we sometimes get into misunderstanding and misconceptions, when we are not careful with words and deeds. Sometimes, our poor choice of words or unwise actions could even cause unnecessary problems for others, or even put them in a spot. May we watch what we say or do, since words once said, or actions once taken, may not be so easily retracted.
at November 23, 2017